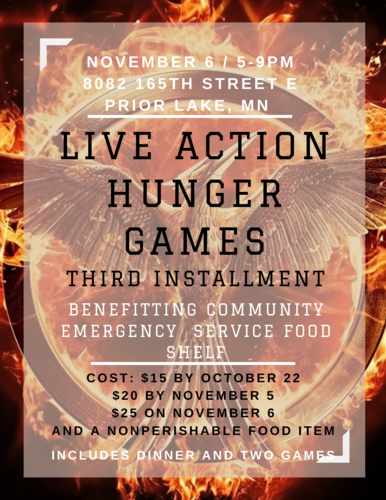 In addition to the event fee, please bring at least 1 nonperishable food item. Every food item is an entry to receive a weapon or immunity throughout the event. The more items you bring, the more entries you get. Registration is not refundable but is transferrable.

"Tributes" will arrive and scope out the "arena". At arrival, you will be given two flags to place on both hips and a backpack. The only items you are allowed to have are a phone, a charging cord, an external battery, and any medically necessary items (i.e. medications, inhaler or epipen). You may fill your backpack with water and snacks.

Gamemakers will communicate via GroupMe (https://groupme.com/join_group/67813796/cgdiBjqC). Tributes may like posts but may not post in thread. All communication from tributes to Gamemakers must be in a separate thread.

At the reaping, male and female names will be drawn and assigned to a district (Couples may volunteer as Tribute in order to be on the same team). There will be 10 minutes allotted to form alliances and strategize.

Tributes will stand in a circle around a "Cornucopia" with supplies and weapons. Gamemakers will release the Tributes. Tributes are free to go after cornucopia items or run away.

To "kill" a tribute, you must take one of their flags or use a weapon. Rewards will be available for every three kills not using a weapon when a tribute turns in the flags of their victims.

Immunity is in the form of a lei and grants five minutes of protection. Tributes must inform the Gamemakers that they have immunity as soon as they get it and when they decide to use it. Gamemakers will communicate when immunity is used with all tributes.

When four tributes are remaining, they will be called to the cornucopia to fight until the finish. No weapons or immunity can be used during this time.

Tributes can win alone or as a district. The tribute will be awarded with prizes and their next game free.

A "Career" is a tribute that makes it to the final three at least three times. Upon arrival to the event, legacies will be offered a reward. Previous Victors are able to volunteer as tribute with anyone, and essentially choose their own partner (of the opposite gender).

IMPORTANT INFORMATION
1) No Emergency Room Visits
2) No Tobacco, Drug or Alcohol Use
3) No Participants Under the Age of 18
4) Waiver MUST be Signed To Participate

May the odds be ever in your favor.