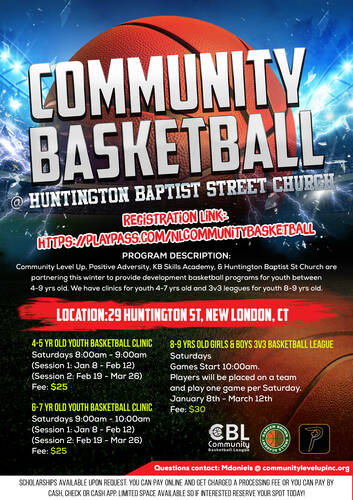 Create a safe, welcoming environment where players can learn the fundamentals of basketball while also playing in a team setting! Players on every team will receive equal playing time in practice & games. Zone defense will not be allowed which will allow players to focus more on development which is important at this stage! Our volunteers will be trained to focus on every student's development and well being rather than the wins and losses. We believe basketball is a sport that can teach life lessons so we also incorporate education, sportsmanship/ leadership, character development, violence prevention & conflict resolution into this program! Throughout the season students will have access to programs at Community Level Up Inc (322 State St, New London CT) and they also will receive different enrichment at practice & games.

Every player will go through a pre draft workout! Pre Draft workout dates will be released by the beginning of December.

Players will play one game per weekend on Saturday. Games will be played between 10am-1pm. Schedule will be released mid December 2021.