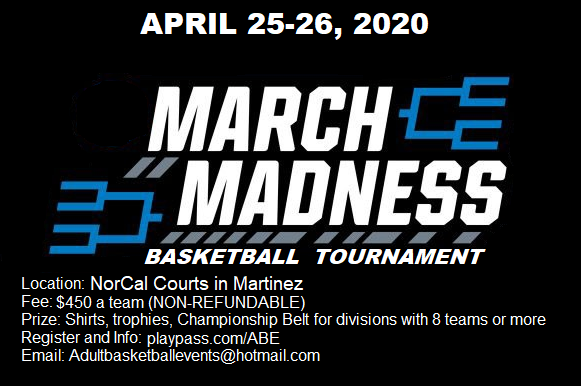 • BE ON TIME: All teams must sign in 30mins. early before your game. You have to start the game with 4 players but are able to finish the game with 3 players.

• Tournament FEE & REGISTRATION: Tournament fee will be $450 per team. You may register on our website at playpass.com/ABE. Payment can be accepted 4 ways:

• Bracket formats:
12 teams division we be divided into two, East vs West. Saturday is double elimination. The top 4 seeds in each conference will advance into our single elimination playoff bracket.

6 teams division will be split into two brackets. The top two seeds in each bracket will be placed in our single elimination playoff bracket on Sunday.

4 teams division will be round-robin. Top two teams will compete for the championship.

• TIMEOUTS: (3) 30sec timeouts for the game. Timeouts carry over in OT. One timeout is given in Overtime.

• 20MIN HALVES: Each team will have a 5 minutes warm up before each game. Half time will be 2 minutes. If we are running behind schedule we will have to shorten team’s warm-ups.

• CLOCK RULES & JUMP BALL: The clock will stop for every timeout and delay. In the first half, the clock stops the last 10 seconds. In the second half, the clock will stop the last 2 minutes, unless a team is up by 15 points or more. There is no stalling until last 2mins left of the 2nd half. During a jump ball situation, both players tide up will have to jump for the ball.

• JERSEYS: Please try to have same color jerseys with a number. No tape is allowed on anyone’s jersey. If there are 2 players or more with the same number or no number, it’s an automatic technical, and 2 points will be given to the other team per player.

• PLAYERS & ROSTERS: You have 24 hours to add players to your roster before your first game. No player is allowed to play on 2 teams or more in the same division. If you do not have enough players because your teammates didn’t show, this will result in a forfeit and automatic loss. Director has the final call to decide a forfeit. All players must play one game to be eligible to play in the playoffs. If a player is injured and can’t shoot a free-throw, the offensive team may designate any player from the bench to shoot in the place of the injured player.

• OVERTIME: Overtime will be 4 minutes starting with a jump ball. Clock stops last 2mins for every dead ball. 3rd overtime is sudden death; first team to score a point wins.

• REFs: There will be two refs per game.

• Rubbish: Please throw away your rubbish after the game.

• SPORTSMANSHIP: If a player gets 2 technical fouls, player will be ejected from the tournament. Please be a good sport and show some respect to each team. We are all out here to have fun, be around friends, and to enjoy this wonderful sport. At the end of the day, we want everyone to have fun because after all, it’s just a game!